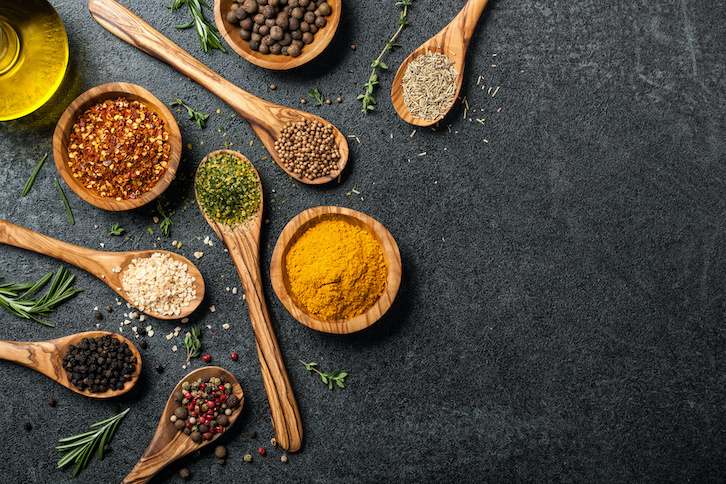 Anatolia, located on the Historical Spice Road, has been an area of attraction since the ancient times of humanity with its climate, fertility, variety and beauty offered by its nature.

Türkiye is home to 12,000 plant varieties and has incredible potential for aromatic herbs and spices.

Due to Türkiye’s climatic and ecological conditions, many herbs and spices are cultivated or collected from the natural sources, allowing access to approximately 3,500 varieties of endemic medicinal and aromatic plants.

It is a leader in the export of dried oregano and laurel leaves in the world. Türkiye exports to almost all of the countries in the world in the forestry products sector. At the crossroads of civilizations, Türkiye has long been a hub for trading spices. For millennia, it was the heart of the spice route with the Spice Bazaar in Istanbul functioning as one of the most famous spice hubs in the world.

Türkiye houses some of World’s most advances herb and spice cleaning Operations, and excels in traceable sourcing, cleaning and bringing products to a finished state, ready for direct consumption.

Despite almost every country having its own food culture, they all have one thing in common – adding herbs, spices, and forestry aromatics to foods makes them delicious! Spices and herbs from Türkiye are often used in many cuisines to add flavor to food, provide aromatic finishes, and taking advantage of their benefits complement dishes.

Grown in Mediterranean and Aegean Regions in Türkiye, the oregano plant is one of the most popular aromatic plants.

Oregano derived its name from the Greek, meaning “Joy of the mountain”. Available in graded leaf sizes or in ground form, with a strong aromatic flavour, Oregano is a most versatile and commonly used herb.

Türkiye meets 80 percent of the world’s production of oregano, which is among the most demanded medicinal and aromatic products in the world.

Oregano adds flavour to a diverse range of products, from sauces to marinades, spice blends and of course adds the classical taste to Pizza Worldwide!

Oregano is the most recognizable herb in the World of culinary art, and easily suits both direct and indirect applications

Medicinally, leaves have been used as an antiseptic and antioxidant. Almost all have anti-inflammatory and antioxidant properties and possess antibacterial activity.  Leaves have been used to treat many different ailments and serve as powerful antioxidants. They may help to prevent cell damage caused by free radicals, which are likely involved in inflammation, degenerative arthritis, and the aging process in general.

Rosemary is Native to the Mediterranean region. The leaf of this tree has a pleasant smell and is always green. The small thin spiny leaves are used both fresh and dried.

Rosemary is popular for its medicinal uses but is now more commonly known as a seasoning used in cooking. It has a tea-like aroma and bittersweet clean fresh flavour.

It is used as a tea and condiment in food sector and it has many health benefits. Reduces stress and creates a relaxation effect. Rich in antioxidants, vitamins and minerals.

Rosemary is heavily used for extraction, as an excellent source of antioxidants. Rosemary is also a prominent culinary herb, adding taste to grills, marinades and seasoning.

Rosemary is also very popular throughout Mediterranean basin for use in salads, to add that bittersweet taste.

With its fuzzy leaf structure, sage is a characteristically aromatic plant. The silvery-gray leaves of the sage plant has a distinctive flavor and aroma. The plant is widely used in food and cosmetics sector.

Sage has proven to be as popular culinary uses as Oregano to flavour meat and poultry dishes, as well as salads, pickles, and cheese.

Two main varieties of sage are used by Herbs industry.

Growing in the Mediterranean and Aegean Regions in Türkiye, the seeds of aniseed plant are used to obtain the aniseed spice. It has a sweetish taste and a characteristic aroma. With its high level of oil essence, aniseed is used in medical and food industries.

Aniseed has a distinctive licorice-like flavour and has been used for medicinal purposes throughout history, especially as a digestive aid.

Anise is heavily used is by liquor industry, dairy manufacturing, meat industry and as a prime ingredient for breath freshners.

Cumin is a flowering plant that has been grown as a spice since ancient times.

Growing in Central Anatolia and Southeast Anatolia Regions in Türkiye, cumin is an annual plant blossoming in white-pink flowers in summer months.

It has a sharp and bitter taste. It is widely used in food sector.

Cumin is the main ingredient of almost all meat blends, marinades and seasoning. With its sharp and distinctive taste, Cumin is one of World’s mostly demanded spices.

Growing in Western Mediterranean climate of Türkiye, this plant gives small, greenish-brown and fine scented fruits which are used in food, beverage and medical industries.

Its sweet, pleasant licorice-like flavor is well-suited for marinades and spice rubs for chicken, fish, pork or lamb, sausage dishes, and baked goods. It enhances the flavor of sweet and savory dishes.

With its soothing taste, fennel is also heavily used by tea industry and baby food manufacturing as it helps digestion in early stages of a baby’s life.

With its intense essence and refreshing flavours, mint which is very essential in Türkiye is a favourite herb used in salads, appetizers, cold juices, stuffed vegetables (dolma) and yoghurt dishes. Mint is also good for stomach ailments and helps with your respiratory tract.

Sumac is a spice known to be as tart and tangy as a lemon and used in Turkish Cuisine a lot. Grown in southeast Türkiye, sumac is collected from dwarf trees and the leaves are dried and ground into powder.

Sumac is the perfect alternative for those professionals looking for the alternative sour/tart taste. Not as sharp as lemon, the mellow tartness of sumac adds a significantly different twist to salads, dressings and water based light sauces

Isot is a unique variety of pepper from the city of Şanlıurfa, Türkiye. The word “Isot” stems from the works “ısı” (heat) and “ot” (herb) in Turkish. Isot is produced by exposing the seed and wing parts of hot red pepper to heat under a certain level of moisture. Isot is used in food sector and exported across the globe.

Isot red pepper isn’t just for your taste buds, these colorful peppers are a rich source of anti-carcinogenic carotenoid called lycopene that is believed to work against cancer.

Get notified about exclusive offers every week!

A Feast for American Culinary Federation Chefs by Turkish Tastes

Turkish Dried Fruits: All You Need For Delicious and Healthy Desserts & Snacks

A 6000-Year-Old Contribution to the Mediterranean Diet: Olive & Olive Oil from Turkey

Get notified about exclusive offers every week!